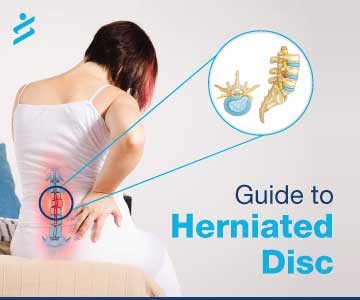 There are a lot of reasons behind our back pain. Sometimes it is related to muscles or nerves, and sometimes it is directly related to our spine.  Several spine disorders cause back pain, and herniated disc is one of them. That’s why we have brought you, Ahmedabad’s best spine surgeon’s guide to herniated disc. Though herniated disc can occur in any part of the spine, it mainly affects the lower part of the lumbar region of the spine. This condition often brings sharp pain in the lower back, hips, and sometimes in the legs as well. It also causes tingling sensation and numbness, which ultimately disturb our day-to-day activity. As the most trusted spine hospital in Ahmedabad, IndoSpine is here with Ahmedabad’s best spine surgeon’s guide to herniated disc so that you can live a life with a healthy spine.

Learn about the herniated disc from the scratch with IndoSpine, the most trusted spine hospital in Ahmedabad.

What is a herniated disc?

Our spine is made of several bones called vertebrae and connected to each other with a cushion-like substance; this is called a disc.

According to Ahmedabad’s best spine surgeon’s guide to herniated disc, the disc in the spine has a softer portion called the nucleus. The nucleus is protected by a more rigid and rubbery annulus portion.  A herniated disc is a condition in which the tougher portion of the disc (annulus) is torn, and the nucleus comes out, putting pressure on the nearby nerves, which ultimately causes pain and numbness. Herniated disc doesn’t always need to cause pain; this condition can also be asymptomatic.

Learn about the symptoms from the most trusted spine hospital in Ahmedabad, IndoSpine.

Signs and symptoms of this condition depend on the part it has occurred. Here are some common symptoms of a herniated disc-

Herniated disc mainly occurs in the lumbar region of the spine, which means the lower back; it affects the nerves connected to the legs. As a result, it causes pain in the hips, buttocks, and sometimes the feet as well.

Herniated disc puts pressure on the nearby nerves, which causes numbness and tingling sensation in the limbs.

The affected nerves affect the muscles as well, which ultimately weakens them. Weak muscles cause the inability to move or lift heavy objects.

Read what the most trusted spine hospital in Ahmedabad, IndoSpine has to say about the causes of disc herniation.

According to Ahmedabad’s best spine surgeon’s guide to herniated disc, though herniated disc has no specific causes, there are several factors that can increase the risk. These risk factors are-

Physical hardship is a potential cause of herniated disc. Repeated lifting and pushing constantly put pressure on your spine, increasing the risks.

Genes can also contribute to the risk of a herniated disc. It is seen in the study that some spine problems are hereditary, and disc herniation might be one of them.

The blood flow in the discs is low. Smoking dehydrates the discs, which increases the risk.

When to see a doctor

Increasing pain or numbness which hampers your daily life is an alarming sign of medical help.

Disc herniation can disturb your bladder or bowel function as well. You might face problems while urinating, even with a full bladder.

Gradual loss of sensation in the affected area is also a prominent sign of immediate medical help.

Your doctor may examine you physically, including walking, physical movement, shock reflexes, muscle strength, working ability, and many more.

Your doctor may proceed with some imaging tests that are useful for detecting disc herniation.

Through CT scans, several x-ray images are combined to create cross-sectional images that enable us to see the details of the spine.

MRI is used to locate the region in which the disc herniation has taken place. In MRI, strong magnetic fields and radio waves are used, which produce detailed images of the internal structures.

A dye is injected into the body, and a CT scan is performed in this process. It shows the pressurized areas caused by disc herniation.

Get to know about the best treatments with the most trusted spine hospital in Ahmedabad, IndoSpine.

If the condition is not severe, then your doctor may proceed with some medication that will ease the pain and help you to perform daily activities.

Hold & cold therapy is very useful in easing the pain.

Heat therapy increases the blood flow which helps to flush out the toxins that come with muscle spasms. But direct heat is not supposed to be applied. The source of heat must be wrapped in a towel and should not be applied for more than 20 minutes at once.

Cold therapy reduces the initial inflammation and muscle spasms. Like heat therapy, there should not be a direct application of ice, it should be wrapped in an ice bag or a towel and should not be applied more than 20 minutes at once.

Epidural steroid injection is used to put anti-inflammatory medication into the affected area.

Massage therapy is very effective and soothing as well. It relaxes the muscle in the affected area.

A lot of people, continue with physical therapy. Some exercises if done on a regular basis can have a beneficial impact on the pain

In some cases, surgical interventions are needed. The surgeries include

In this procedure, all the affected parts are removed to relieve the pain.

In this procedure, the part of the bone that is putting pressure on the nerves is removed.

This is how we conclude; Herniated disc is a condition that if not taken care of can hamper your day-to-day life. Get the best treatment for any of your spine disorders only at IndoSpine, the most trusted spine hospital in Ahmedabad.